Rye Playland is one of my favorite vintage parks, period.  If you're in the greater NYC area, DO plan on attending their 2013 season opening day on May 11!  It sure looks to be like a swell time!  There's a parade and entertainment and special rates!!

Here's a snap of yours truly with Ms. Zoltar, taken back in 2011 when Ben and I visited the park (and I fell completely in love with it): 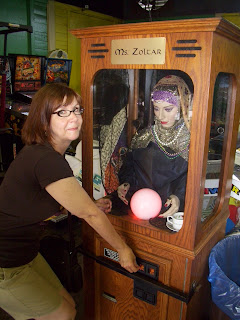 Posted by Pam Turlow at 5:16 PM No comments:

Thanks to my Facebook pals, I was reminded it is Arbor Day!  Which is super, because I'm going to have time today to work on our garden, prune the Ginkgo tree, and spruce things up in general (no, no spruces are involved, unfortunately).  But it got me thinking about the parks we visited for the book (which can be purchased directly from CreateSpace, because of course you want to do that: https://www.createspace.com/3840248 ) and I immediately was festooned with images of the beautiful-doesn't-fully-describe-it Carousel Gardens, part of New Orleans' magnificent City Park.

For those who've never been, City Park is huge, it contains all manner of entertainment and amusement, including an art museum, concerts, a dog park, recreational facilities of all sorts, and Carousel Gardens and Storyland.  Storyland is totally kiddie-sized, featuring various fairytale scenes and characters for kids to romp around in and around.

Carousel Gardens is the amusement park, which contains wondrous things, like the ride it's named after, their gorgeous carousel, which battled the flooding from Hurricane Katrina, and WON.

There's also a miniature train ride, which circles the south end of the park, extending from the amusement park proper and into the "outside world" of picnickers and strolling couples and old folks settin' a spell under the magnificent oaks.

And about those oaks.  Here's my tribute to Arbor Day, thanks to the copious amount of photos taken at City Park.  Spanish moss drapes provocatively from nearly every branch, enveloping portions of the parks, providing cooling shade, and adding a touch of moodiness and magic. 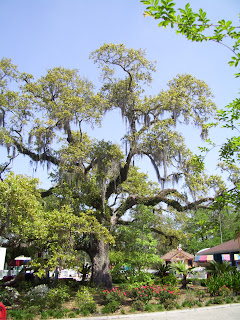 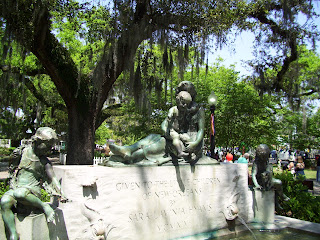 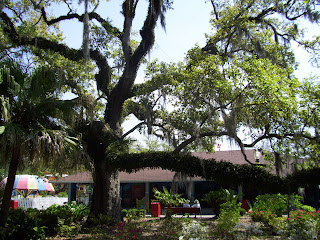 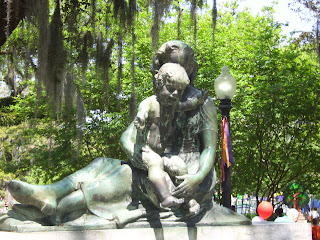 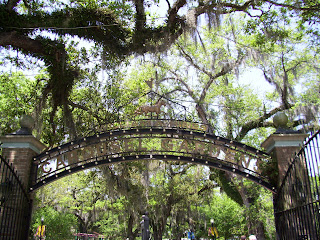 Happy Arbor Day.  And if you're in the greater New Orleans area, now you know where to go.
Posted by Pam Turlow at 3:03 PM No comments:

The Iconic Log Ride at Knott's Berry Farm Gets an Update!! 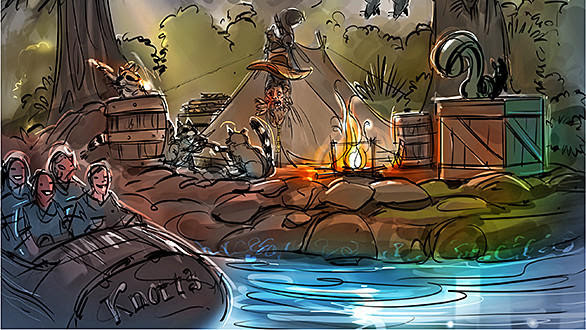 My memories of the Knott's Berry Farm log ride are from 1971, when my Mom and I rode it during the only "girls' only" vacation we ever took.  I recall the drop down at the end, the steepness of the flume, the splash of the water, the giggles of delight (from both of us).

It's heartening to know that Knott's will be re-furbishing this iconic ride, and utilizing some concept art from its early days.  This is a beautiful ride, considered by many to be THE best log flume ride out there.  I think I'd tend to agree.

When I visited Knott's in 2011 for my book, it was a blowy, cold day and I wasn't able to ride the log flume.  I actually became rather emotional about it, because I was planning to ride it in my Mom's memory.  But I think Mom would be proud of this great vintage park and its moving into the future, while embracing its past.

Posted by Pam Turlow at 5:12 PM No comments:

Part of my job as a Vintage Amusement Park Maven includes trolling around Facebook throughout the day, lurking to find exciting information for my fellow vintage amusement park enthusiasts.  Well, here's a doozy for Northern Illinois park fans!  Copied from their Facebook page, the great folks at Santa's Village Azoosment Park say:

"2013 Grand Opening on Mother's Day May 12th ... Mothers on that day will be admitted FREE when accompanied by 2 full paid admissions. Hope to see all you Mothers out at the park on May 12th for a fun filled day to kick off our 2013 Season! ~ Jason & Don"

Folks, get yourselves out to this super East Dundee park!  The owners have been hard at work, adding even more rides and attractions in the past few months.  You recall the park was closed for years and sat dormant.  If you've been paying attention in the slightest to my mad ramblings, you also know this park has "adopted" a few of the iconic Kiddieland rides after that park closed.  All in all, Jason and Don are creating vintage park magic: bring back the nostalgic past and enriching the experience with the fresh and new.

It's not every day that a park essentially left for dead rises up again and comes back better than ever.  Santa's Village Azoosment Park is a miracle, incorporating rides, shows, animals, and attractions in one fun place!!

A link to an article from last year I was proud to have been a part of:

Posted by Pam Turlow at 4:24 PM No comments:

Never underestimate the power and drive of a little amusement park that won't stay down for the count!  Read this article and learn about what's NEW at Keansburg for the 2013 season!!

I'm so excited to announce that I'm planning to re-visit the park in July, adding some updates to my book.  The above article says there's a new spook house and a renovated game room.  I'll be curious to see them both; the originals, which I enjoyed in 2011, were my favorite parts of the park.  But also, the vintage kiddie rides.  And I hear they're back as well!

Keansburg's got a new coaster, too.  And improvements to their waterpark area.

Posted by Pam Turlow at 1:38 PM No comments: