Our trip to the greater San Fran area is now a fond memory. I'm back at my usual job: auditioning for v.o. jobs, writing my Cotton Candy book, and attempting not to spend a lot of money until those voice-over jobs start pouring in again. An itchy economy is a pain in the dupah (that's Polish for "where the sun don't shine" or as Monty Python once called it, "the sit-upon").

I've got about half of the money I need to actually be granted my Kickstarter funding, but there's still a ways to go. I have 28 days and still a chunk of money to assemble. Now's a perfect time for you to pledge -- because if you do so today and pledge more than $20, I guarantee you the valuable parting gift of a snowglobe from the next park I visit. A snowglobe. Who doesn't love snowglobes? Even Charles Foster Kane was a fan.

My clearest memories of whiling away time on an oceanside boardwalk were spent near Brighton on a blowy day in November about twenty years ago. It was a pensive visit, with plenty of time for pondering life and existence and the Cornish pasty I had for dinner the night before.

Yesterday's visit to the Santa Cruz Boardwalk was different in every possible way, except the weather part. The rain toyed with me for hours (coaxing a visit to an Urban Outfitters for a brolly -- a "raining cats & dogs" design), but in the end, it held no power whatsoever over the joy to be found on the Boardwalk (Rides! Arcade! Indoor Mini Golf! Pirates!). Except a few rides were closed for safety reasons due to the precipitation. But that didn't include the Haunted Castle dark ride. I lived to tell that tale (tune in to a near future blog post for more) and not only lived, but thrived. And thrived enough to take down some chocolate-covered bacon and a deep fried Twinkie.

Just say those words: "deep friend Twinkie" and try to fight the urge to make one yourself. Recommended accoutrements: powdered sugar dust and chocolate sauce for dipping. And a Twinkie twinkle in your eye, the kind of twinkle reserved primarily for those under the age of twelve.

The Santa Cruz Boardwalk is THE actual Pleasure Island, except no children are stolen and turned into donkeys.
Posted by Pam Turlow at 12:45 PM No comments:

Once upon a time, a magical storybook park called Children's Fairyland came to be. Built in the middle of a rambling city park in Oakland, CA, it's thrilled children for sixty, count ;em, SIXTY years! Heaped in history, colored by touches of whimsy throughout, it not only entertains little ones, but encourages literacy through a variety of literature-themed scenes and activities. It's a gentle, safe and, most of all, enchanted place for all to explore. Oh, and it has an incredible puppet theatre where Frank Oz first learned his craft. How do I know? I given an incredible backstage tour of the space and spied some marionettes dating back to the late 60s which were clothed by Mr. Oz's mother, a very talented seamstress.

And now I'm the proud owner of a genuine Fairyland magic key which allows me access to all the recorded storybooks throughout the park. Including the one of the Merry Miller (dating back to the 50s) which is voiced in part by none other than Boris Karloff. I learned the keys sold back in the 50s still work today, thus tying in past generations with the present. And the future.

May Children's Fairyland live happily ever after.
Posted by Pam Turlow at 10:02 AM No comments: 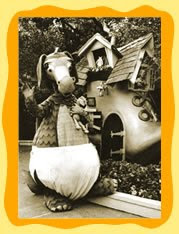 Disneyland is fully ensconced in our popular culture in just about every conceivable way, from film to squeaky toys, waffle irons to diaper bags. It's even become the "go to" destination for those lucky athletes who, when asked what they'd like to do after their Superbowl victory, proudly spout "I'm going to Disneyland!". And I'd have to say, it's one of my personal Happiest Places on Earth, with special significance for my hubby and me and our sense of play. The venerable park just celebrated its 55th anniversary. It continues to delight and amaze, and will certainly do so for generations to come.

But I'm betting you didn't know that Walt Disney was inspired by a small storybook park in Oakland, CA. The following is an excerpt from Children's Fairyland's website, a bit of vintage amusement park history few are aware of. I was informed of this connection by park historian and Storybook Puppet Theatre director Randal Metz. Now, from the park's history webpage:

It wasn't long before Fairyland inspired imitators. Storybook parks sprang up around the country, but few lasted long—with one notable exception. Not long after we opened, a fellow named Walt Disney visited Children’s Fairyland. He liked it so much that he incorporated some of our innovations into his “magic kingdom,” which opened in Anaheim in 1955. He also hired Fairyland’s first executive director, Dorothy Manes, and one of our part-time puppeteers, Bob Mills.

So when you're next strolling through Disneyland and admiring its wonders, remember to give a nod to a small storybook park in Oakland, where some of the magic truly began.

I'll be visiting Fairyland in just a few days and am giddy with expectation. Check back for my park report. And have a Fairyland Day!
Posted by Pam Turlow at 12:10 PM No comments:

Sunday on the Blog with a VIDEO!

Quick local TV report on the opening of the NEW Haunted Castle at Santa Cruz Boardwalk (what will be #24 on my Road Trip -- in just a few weeks!!). The new ride replaces the vintage one that thrilled patrons since 1973, but prior to that, the space was the home of other dark rides. Santa Cruz Boardwalk definitely has a handle on embracing its history. Enjoy this "just in time for Halloween Month" bit o' fun!
Posted by Pam Turlow at 11:36 AM No comments: