One Man's Dream, shared with so many.

While tweaking some of my Cotton Candy writings, a few events jumped off the pages as having more than a little impact.  One of them was part of a trip that almost didn't happen, touring through a park that's way too new to actually be included in the book.  But I'm adding it as a sizely sidebar because it meant so much to me.

"Walt Disney: One Man's Dream" is an exhibit that'll be running indefinitely at Disney Studios in Walt Disney World.  I highly recommend, no, I urge you with the strength of a team of stallions carrying a large man in a chariot, you MUST take in this exhibit and this film.  If you're a Disney fan, if your'e an artist, if you're a dreamer, it may very well change your life.  It changed mine.
Posted by Pam Turlow at 4:09 PM 1 comment:

Creepshow at the Freakshow at Coney Island 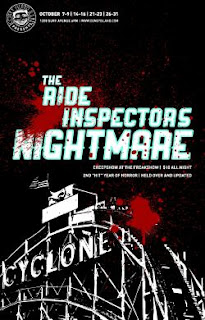 I'm a big fan of the folks who run the Coney Island freakshow.  Part of my East Coast roadtrip, my visit to the freakshow and the Coney Island museum connected me with this group of highly dedicated, creative performers who have their hearts in the rigth place and hold the history and spirit of the true Coney Island  reverently - and somewhat irreverently.

So when I got win that they put together a mean haunted house, I had to learn more.  Truth be told, I hate haunted houses that aren't actually haunted.  Give me an EMF meter and night vision camera, and I'm golden, but I don't get the thrill of spending good money for people to chase me with chainsaws.

Having said that, if I had the time/money to make it out to Coney for their own unique brand of horror show, I'd be there in one quick bone rattle.  From what I get from reading the description, it's more a theatrical experience, fully immersive, and completely original and deeply creepy.

Think about it: it takes you "into the tortured dreams of a corrupt and drug-addled amusement park official".  Can't think of much that would be creepier than that.
Posted by Pam Turlow at 9:54 PM No comments:

A biggie.  A real biggie.  Wherein I finally tackled the daunting task of writing the Southern California chapter which was a complete homage to the trip I took in 1971 with my Mom.  One of the most emotional, soul-bearing experiences I've had in a while.  What I wasn't expecting was how the process of writing helped to bring me closer with who my Mom really was, what she stood for, and what she valued.

While she didn't wear it on her sleeve, she valued creativity and play and adventure very strongly.  That's why she loved Disney and Disneyland so much.  But because we didn't have scads of money, we always found unique ways to have that manifest. Quite often it was just a day trip to a not-too-far-away amusement park.

I know she would be so proud of the person I've become, the person who puts exploring and being creative and simple things like play very high on her "stuff I WANNA do" shelf.  She'd have a blast on the Road Trip.

Thanks, Mom.
Posted by Pam Turlow at 5:53 PM No comments:

What to do this weekend? How about a trip down Memory Lane and an Autumn Fest combined?

It's an uncommonly brilliant autumn thus far.  Want to do something sweet and memorable while enjoying the amazing weather?  Drive on out to visit our old friend, Santa's Village in East Dundee!  It's re-open, it's now an "Azoosment park" with gentle animals.  Listen up:  they're having a fall festival this weekend and the next two!  Follow the link above to learn more.  What a perfect way to spend a great Fall afternoon with the kiddies - or to travel back in time to the park you remember as a kid!  Bonus: it is the current home of two of the beloved Kiddieland rides!

Enjoy these photos, but do take a hike out west to enjoy more in person.  Get a pumpkin while you're at it; we did! 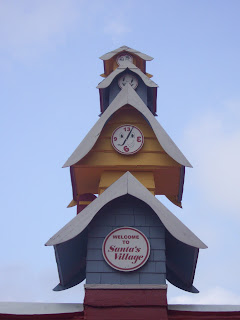 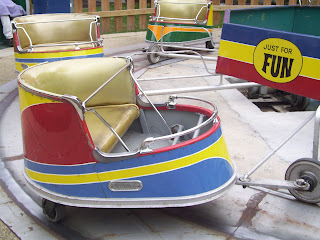 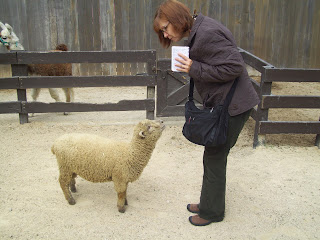 My weakness?  Lambs.  I love lambs.  I get stupid around lambs.  This one almost ate my notebook. 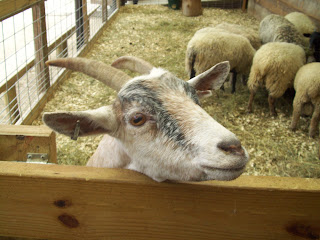 A goat with an amazingly sincere face.  Forgot his name, but I shall call him Enoch. 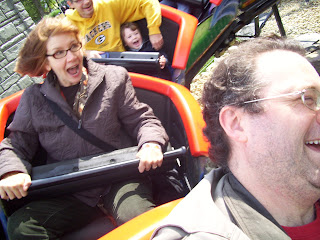 Yes, that's us on the kiddie coaster, screaming to high heavens.  We left the pumpkins at the entrance of the ride, in case you're worried.
Posted by Pam Turlow at 3:44 PM No comments: 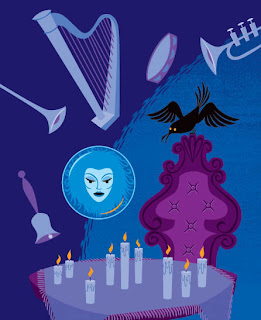 Whenever a friend of mine goes to Disneyland, I always tell them, "Say 'hello' to Madame Leota for me."  It's a thing I do; it's my way.  Because the Haunted Mansion has been one of my long-time favorite attractions anywhere, for any reason, any time at all.  I've got the soundtrack memorized, and I've amassed a small collection of HM memorabilia which I proudly display, especially during this time of year.

Imagine my utter ghoulish delight when I happened upon this site, which breaks down Leota's incantations and gives background info on the whole Seance Circle portion of the ride!  What's more, it gives annotated background to just about every single phrase, with historical footnotes.  Kudos to the folks at Hollow Hill.com who have taken the time to assemble an amazing site for the true HM geek like me!

Artwork: Shag
Posted by Pam Turlow at 9:35 AM No comments:

Can you feel it?  The veil between worlds is getting thinner.  It's finally October, one of my most favorite months of the year, due to its Spooky Quotient.  I'm in the throes of putting up my vast collection of Halloween decorations, including my witch dolls, a collection which has grown by leaps and bounds in the recent past.  The downstairs bathroom, which has a Disneyland theme, is now decked out with a sinister Mickey Mouse (well, as sinister as he egts) as Dracula and a mini Doombuggy.

Looking back on my Roadtrip, a variety of haunted house attractions totally spookified me.  Some were the blood-running-down-the-walls variety, while others were rather charming.  Here's a mere sampling:

The Santa Cruz Boardwalk Haunted Mansion has one of THE best special effects I've seen in any haunted attraction.  It involves a menacing presence in a scary swamp.  Go there -- you need to see it for yourself. 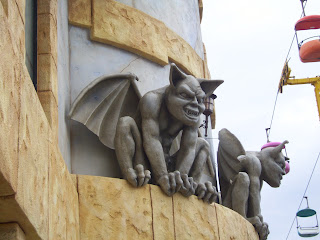 The dreaded Gum Wall is an attraction like no other.  Catch it at Conneaut Lake Park's Devil's Den.  Well, don't actually catch it, cuz you might catch something.  Just let your ride vehicle go by it... 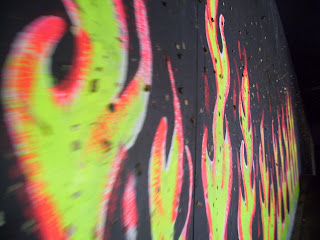 Deno's on Coney Island has a wicked-cool dark ride, the Spook-a-rama, wherein you'll... no.  It would be a tragedy if I told you.  just go see it. 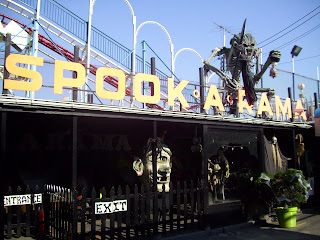 And finally, there's Rye Playland with three dark rides, each a true treasure.  Here's the one that features zombies, as the name might suggest.  But I simply CAN'T give any details; you gotta see it in person: 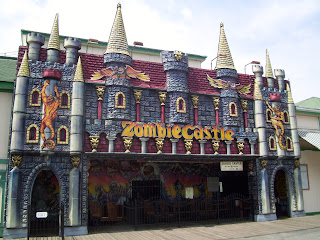 Been sufficiently spookified?  No?  Then how about Grandma Fortune Teller at Deno's? 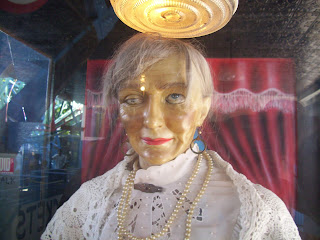 Yep - thought so.  That should hold you for this blog post...

Posted by Pam Turlow at 3:27 PM No comments: