Hot doggy!  I've been going through my entire string of blog posts, from the very first one, to make sure I don't forget to add relevent ones to my book.  It took me three hours today - read, write, edit, cut and paste -- repeat!  It's messy work, but I believe it will add even more texture to the finished product. 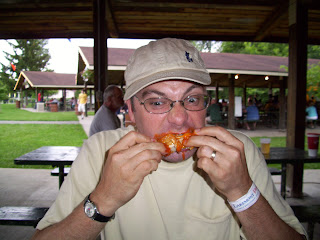 Here's my beloved, taking down number seventeen of approximately twenty-four wings at Lakemont Park back in the early stages of Road Tripping.....
Posted by Pam Turlow at 6:54 PM No comments:

As of 1 P.M. central time yesterday, the main writing of the book is completed.  Now, for the editing, the formatting, the inclusion of photos, the addition of "best of"s, the incredibly long list of credits... 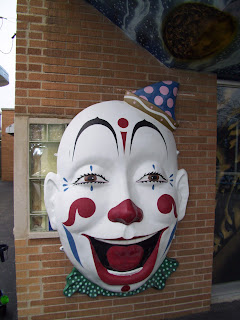 Kiddieland, where it all began...
Posted by Pam Turlow at 2:06 PM No comments: 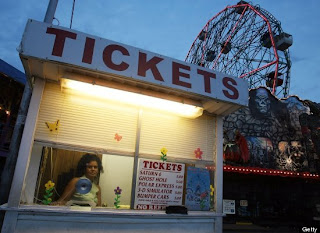 In a recent poll, amusement park ticket attendants and workers ranked in the 10 lowest-paid jobs, raking in around $19,000 annually.  As you can imagine, this pains me.  The park attendants I've met across the country are, in general, very proud of the parks they work at and love their jobs.  And they often act as the park historian, with a wealth of knowledge and stories you'll never forget.

In an age where the middle class is shrinking in size and impact, I think it's very vital to remember that it's folks like this ticket booth operator who provide sparks of color in a rather dreary world.
Posted by Pam Turlow at 3:07 PM No comments: