Just settin' out in the Boondocks 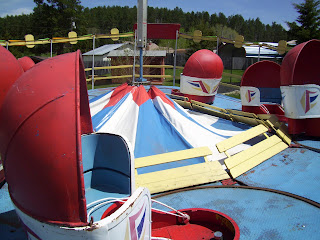 After visiting Deadwood, South Dakota, home of rootin' tootin'ness, casinos, and formerly of loose women (the town fell into a state of collapse after prostitution was made illegal), we ventured back toward Custer and found a place called Boondocks at the side of the road.  The photo above is one of the rescued amusement park rides you'll find at Boondocks.

But wait - maybe you're more intrested in classic cars?  Good - they have them here at Boondocks, too. 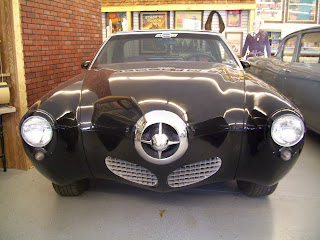 It's like this one's smiling at me for adding it to my blogpost.

But maybe you're feeling a bit peckish?  That's fine - how about some soft serve here at the diner, one of those silver bullets diners you see in old movies. 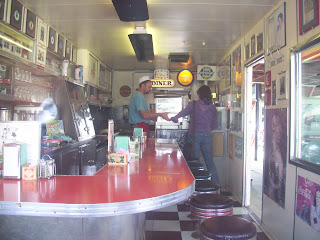 (that's me, on the right; soda jerk on the left.  Coolness abounding)

That's it.  Just pondering on Boondock's, is all.
Posted by Pam Turlow at 2:57 PM No comments:

When a park sits dormant, vacant, for years, it's a miracle if it EVER gets refurbished again.  Well, I'll be witnessing a miracle of sorts today, when I visit Santa's Village Azoosment Park in Elgin, IL.  To add to the miraculous?  They've bought two of Kiddieland's rides, saving them from the scrap metal heap.

It used to be Santa's Village, and I remember all sorts of North Polian buildings and rides, and the Jolly Old Elf himself.  But now it's, well, we'll see what it's all about in a short few hours.  It's an "azoosment park" so animals have been included, which is smart because everyone enjoys visiting gentle farm animals, but especially kids.  Give kids a petting zoo and they're happy for hours.

What's really ironic is that it was brought to my attention that two years ago this week, Kiddieland closed.  That was the beginning of my Road Trip.  And what will I be doing to commemorate the end of said trip?  Visiting a retooled park that was one of my childhood haunts, that's rescued some of the vintage rides from our beloved Kiddieland, allowing a whole new generation of kids to enjoy them.

It's poetic, it's an eloquent full circle moment.  I dig when stuff like that happens.
Posted by Pam Turlow at 10:44 AM No comments:

For those of you following along, you'll be pleased to learn that today marked a huge milestone in my book progress.  I've transcribed each and every note thus taken.  now the rest of the creative, fun works takes over.
I've written about 70% of the book already (not just notes, but fully-conceived and scribbled down), but the last 30% or so is now waiting for me to transform it into the same sort of magic that I modestly feel I've already attained with the rest.  And then the herculean task of sorting through literally thousands of photos.  Oy vey schmear, so many photos!!

But first, one last park to visit.  This Sunday.  Stay tuned to learn more about that.


Until then, please do enjoy this photo from Kennywood Park in Pittsburgh, PA. 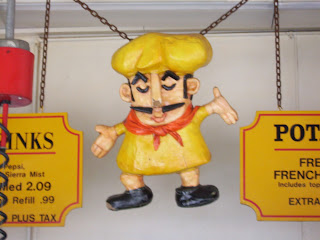 It's the Potato Patch Fries chef.  I choose to celebrate my milestone with the happy memory of too much potato.  Much too much potato.
Posted by Pam Turlow at 10:08 PM No comments:

Sunday on the Blog With Photos! I'm LATE! 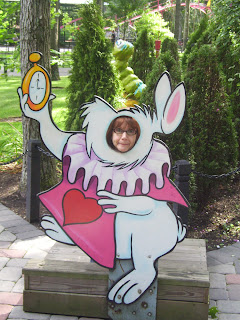 Many apologies for being late and not very up-to-date with my blog postings, but especially with my Sunday on the Blog with Photos posts!  A lot has been going on at the Turley (that's Turlow-Dooley, for those unenlightened) household in the last month or so, but now things have ironed themselves out a bit and I can regain my focus on the blog, the book, the whole shebang.
So, no time to say hello-goodbye!!!

(Photo from the Alice in Wonderland walk through portion of Storybook Land in Egg Harbor County, NJ, one of the greatest storybook parks you'll ever visit.  Time got away from me there, too!)
Posted by Pam Turlow at 10:16 AM No comments:

When you step foot in Knoebel's Park in eastern PA, you truly feel transported back in time.  It's in my top 10, and possibly top five.  Okay - it's in my top three parks for my Road Trip.  And Hershey Park is warm and welcoming; their zoo is a small-but-mighty historic treasure.

Just read that both parks got walloped by tropical Storm Lee and suffered extensive flooding.  Worse yet, Hershey Park's Zooamerica lost two of their beautiful bison.  Please say prayers for the folks who are working hard to clean up and put things back to rights.  So very, very sad.
Posted by Pam Turlow at 8:45 PM No comments: 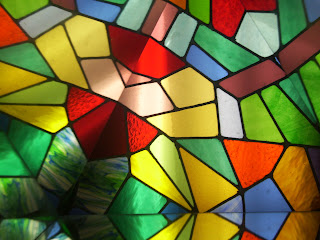 Taken inside one of the structure in the Olde English section of Oregon's Enchanted Forest Park.  I know I've mentioned it before, but I must remind you:everything in the park was made by hand.  All the structures, including buildings and fairytale scenes.  And rides.  All by hand.  And that also includes this beautiful piece of stained glass.
Posted by Pam Turlow at 10:02 AM No comments: