Well, nothing really connected with vintage parks was nominated this year, but "Toy Story 3" is a lock to win Best Animated Feature! And as we just came back from Disneyland, I feel it's appropriate for me to post this picture from the only film I know that's made more guys cry than women (my "Toy Story"-related crying jag was taken care of with "Toy Story 2" and Jesse and you know exactly what scene I'm talking about).

You'll never have a truer friend than Woody.
Posted by Pam Turlow at 11:08 AM No comments:

Back from relatively sunny but ridiculously cool Southern California!

Five more parks down. That includes the holy triumvirate and two boardwalk parks. One was closed. One was rained out. More about that later.

If we had our druthers, I think Ben and I would move to SoCal. But we have various commitments here and a move would be a Very Complicated Event. So we savor our Cali trips, looking forward especially to wearing sandals in February.

This trip was different on many levels, including the inability to wear sandals in February, because the highest the thermometer got was around 60. And the evenings required flannel-lined jeans -- which I did not have with me.

Still, all that being said, the trip was magical. Very spiritually connected. I'll go into that in greater detail in the days ahead. Let's just say that when you revisit the three parks you visited forty years ago with your Mom on your only mother-daughter trip ever, she finds ways of making herself known. A whiff of nicotine, a perfectly made cocktail, free upgrades: the lady kept busy.

We drove from the John Wayne Orange County Airport down to San Diego and Belmont Park, then looped up to Palm Springs, west to Santa Monica Pier's Pacific Park (in a downpour), up to Universal Studios, down to Buena Park (Knott's Berry Farm) and then down the highway to Anaheim and our Happiest Home Away From Home, Disneyland.

As I said, more to come in the days ahead.. Lots to document,. But today I'll be transcribing my audio notes into actual notes in my laptop. I'm a terrible typist, so that should take about five hours. For about an hour's worth of jabbering.

For now, there's a pile of laundry that's as high as the Matterhorn (might even have an abominable snowman somewhere hidden inside...)

(Walt with model of the Matterhorn Bobsleds. My laundry pile is much larger)
Posted by Pam Turlow at 1:53 PM No comments:

"Wait, wait, wait!" I turned the heads of the guys pushing the heap of old lumber toward the dumpster. "I'm writing a book on vintage amusement parks and I'd love to own a piece of a rollercoaster. Those are going in the dumpster, right?"

"May I take this one?" I asked as I gingerly slid out a small piece of white painted wood from the pile, like a kid playing Jenga.

"Sure, whatever makes you happy." said Mr. Incredulous, looking at me like I had bats flying out of my ears.

I now own a piece of the Giant Dipper, the signature rollercoaster of Belmont Park. I thought I'd get to ride the ride, but a mix-up in communication landed me at the park on a day when it was closed (lemons), but I got to interview the guys who work on refurbishing it on a rotating basis: this week this portion, next week a different part (lemonade).

Yep. I'd say this first leg of my Southern California Roadtrip is going pretty darned well.
Posted by Pam Turlow at 11:11 AM No comments: 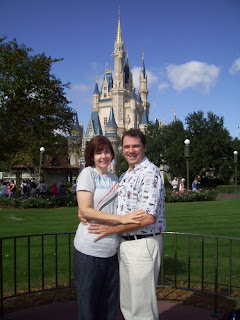 Ben and I have a few favorite places on earth, that spark the romance and make us feel like we're gawky teenagers at the homecoming dance. Disney is, was, and always will be one of those places.

Pictured here are the two of us with Cinderella's Castle lingering in the background. Walt Disney World is technically a tad too young to be included in my book as one of the forty parks, but I'll find a way to finagle something about the place. It was one of Walt's last dreams -- and that's good enough for me.
Posted by Pam Turlow at 11:18 AM No comments:

Sunday on the Blog with Photos! 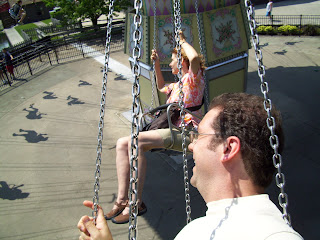 Prior to our old time radio show performance today (Ben and I run a radio troupe and perform at my Dad's retirement home), someone asked me if I'd been to Cedar Point for my Roadtrip.

"It was our first park!" said Ben, with a sense of pride and accomplishment. It's Ben's childhood park, you see, full of wonder and excitement even after all these years.

Above photo is us on the swing ride at Cedar Point in Sandusky, OH. It was during this very ride that we collectively realized that swing rides are no longer on our roster of things that bring merriment. Things that bring sweaty upper lips and an uneasy queasy feeling, yes. But the merriment, not so much. Although the photos belies that fact.

Gotta admit, it's a cool photo, like we had a paid photographer on hand, riding along side us in a small helicopter or something.

Ben's got extra long arms -- and good aim.
Posted by Pam Turlow at 4:55 PM No comments:

Astrologically-speaking, it's a great time to go on the Road Trip 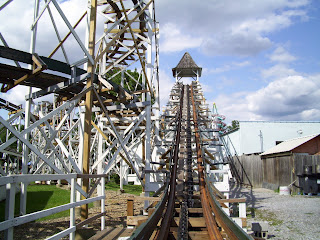 The next leg of the Road Trip is nigh. And energies seem very high across the board (yes, do allow me to wax esoteric here for a bit).

Yesterday was a bumper day, when I learned about some things that were otherwise hidden that are of great benefit, when I got a great response from one of my "parks to be visited", and when I also launched my new blog on my voice-over career. Then this morning I found an email newsletter from a particular astrologer whom I tend to agree with and/or glean great things from. Read this:

The mix of Uranian-Aquarius and Aries energies this week gives us a sample of the herky jerky energy to come. In this transmission from the Akashic Records, the energies for February are described as jerks forward. Writes, Jen Eramith, "It is very similar to the feeling of climbing onto a roller coaster and sitting down in your seat, buckling up and when the roller coaster first starts to move, it jerks you forward."

Pretty crazy, huh? I mean, this is exactly the kind of energy that's needed when going on my trips. I actually embrace it. A little herky jerkiness here and there makes me feel alive, reminds me of my mortality, gives me that little wake-up call about my journey and its importance.

Photo: Leap-the-Dips coaster at Lakemont Park. Opened in 1902. Oldest operating roller coaster in the world. Yes, it has that golden "herky jerky" moment.
Posted by Pam Turlow at 10:17 AM No comments:

"Sorry. Your park is too young."

I hate having to tell folks that. SO many people greet my book with gallons of enthusiasm and there've been a few times when folks mention their favorite park, only to be met with my sadly down-turned eyes, my shoulders rumpling down a bit, while I prepare to tell them the worst.

It happened during a voice-over session today. During a break, we talent got to talking (we talk in front of the mic, when we're off the mic, any chance we get; we're a chatty lot), so I brought up Cotton Candy and both guys were really curious about it. Then one gentleman's' eyes widened and a smile sparked his face.

"Hey -- will you be visiting my park? It's been a favorite of ours for a long time." Years just fell off him as he added some details about "his" park. He then mentioned the park's name, throwing me into my "gosh golly" excuse mode. I hate having to tell folks that the parks I'm visiting need to be forty years old or older as of the time of my visit, and watching their crests fall. This guy's park was built in 1975, a youngin' by my standards.

And in case you're wondering: no, I shan't name the park. Just makes me too darned sad.
Posted by Pam Turlow at 4:34 PM No comments:

This is what I left the coffeehouse thinking.

Met up with a fellow voice talent and writer friend of mine today, to dish about both of our businesses, commiserate on the thinness of voice work, and share heaping mugs of joe. She's a fast-talking, fast-thinking lady, full of bubble and smirk; I adore her. When our conversation began to center around my Cotton Candying, I told her that I'd be going up to the East Coast eventually (where she's from) and wondered what her childhood park was.

"That would be Canobie Park in New Hampshire." she said, stressing the "can" part of the word, the name deriving from an area Indian tribe.

It was then I realized that I should, always, always check with the locals for the proper pronunciations of their parks' names. I'd been pronouncing Conneaut Lake Park's name incorrectly until I was gently corrected by a life-long Conneautian (or is it Conneauter? Conneautling?)

That's part of the fun of Road Tripping: taking in the local tongue, the various place names whose pronunciations need to be pinned down and conquered at times.

I'm still working on Lake Okoboji, home of Arnold's Park. No, don't ask me to pronounce it right now. I've tried; that one makes my brain hurt.
Posted by Pam Turlow at 11:56 AM No comments:

Born in a blizzard back in the Sixties...

No, not a line from some little-known song by the Monkees. It's actual fact. I was born eversomany years ago during a blizzard. As the family legend goes, either my parents were nervous about getting my Mom to the hospital in time due to the weather or, after I came plumbling into this world, they made my parents stay at the hospital a day longer than usual, for fear that the tiny Turlow family, with new addition Pamela Ann (pink ribbon firmly Scotch taped onto head) would get stuck in the snow on the way back home. As we lived only fifteen minutes from said hospital, either portion of this legend stands up as testament to the fact that, yes, it was some humdinger of a storm.

I hear the wind picking up outside now, rooshing around the side of the house and rattling the windowpane. It's going to be a doozy, "Snowzilla" as it were. But since I was born during a blizzard, this somehow feels "right".

This past year had more ups and downs than Seabreeze Park's "Jack Rabbit" coaster (my most white-knuckling ride of 2010, actual ride-wise). Floods and confusion, enormously rewarding artistic ventures, and jobs that came and went with a sonic boom. Still, I weathered those personal storms, and now I'm feeling such a brilliant, warm upsurge of energy that it brings tears to my eyes. God provides and brings miracles. I needed that turbulence to clear out what wasn't needed, thus allowing space for miracles to tumble in. I feel that this upcoming storm is simply energetically sealing the deal.

So, I'm wearing an ethereal t-shirt stating thus: "I Survived the Blizzard I Came in With, All the Blizzards I've Been Given, and will Continue to Tackle the Highs and Lows, Including the Ones Provided by Nifty Wooden Coasters!"
Posted by Pam Turlow at 1:13 PM 1 comment: